Prepare at least 24 hours in advance

Prepare at least 24 hours in advance

For Salmon and Bowl Assembly:

Combine all ingredients in a sauce pot over medium heat until sugar and salt dissolve. Remove from sauce pot and set aside to cool to room temp.

Pre-heat oven to 350°F. Combine beets, thyme, extra virgin olive oil, a good pinch of salt and pepper in a high-walled baking dish. Squeeze orange halves over the mix and toss to combine. Cover baking dish and roast until the beets are tender and easily pierced with a paring knife, about 35 minutes. Once tender, remove dish from oven and leave covered for 15 minutes to let beets cool slightly and steam a bit. Using a dish towel (or two, they will be hot!) peel the skins off the beets. Once beets are free of skin, cut into ¼ inch cubes and place into a bowl. Cover with pickling solution and let sit in refrigerator at least overnight. Beets will keep covered in pickling solution in a refrigerator for 2 weeks.

Boil mustard seeds in enough cold water to cover. Drain water and repeat this process 3 times to blanch and remove bitterness. Combine with pickling solution, bring to a boil and let cool to room temperature. Mustard seeds will keep covered in pickling solution in a refrigerator for 2 weeks.

Combine all above ingredients with 6 cups water, salt and pepper to taste in a medium pot and bring to a boil. Reduce to a simmer and cook until farro is tender, but not mushy, about 30 minutes. Drain excess water and spread on a sheet tray to cool, removing spent aromatics.

Combine all ingredients in a bowl and mix well. Set aside.

Season salmon liberally with salt and pepper on both sides, then rub with 2 Tbsp. olive oil. Smoke salmon on a sheet tray at 225°F, full smoke cycle, until just cooked through, about 45 minutes. Set aside to cool.

In a large bowl, add cooked farro, pickled beets, 2 Tbsp. of pickled mustard seeds, 2 Tbsp. olive oil, picked tarragon and parsley, 1 Tbsp. chives, zest and juice of 1 lemon and mix well. Season with salt and pepper to taste. Divide farro into four bowls. Using the same large bowl, break up the salmon and season with a bit of salt and pepper. Divide salmon into a neat pile on top of the farro in each bowl. Garnish with a heavy pinch of the everything spice, the remaining chives, a pinch of flake salt, and a light drizzle of olive oil. 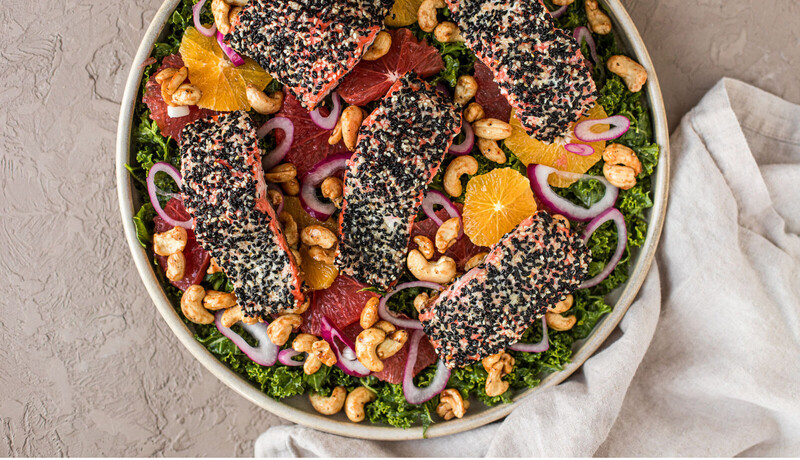 ASMI staff are currently working remotely but readily available to connect with you by phone or email. Find the ASMI staff directory here.

The National Seafood Council is offering scholarships for small- and medium-sized seafood businesses to help shape and launch the council and its initiative to develop a consumer marketing and education campaign. Click here to learn more. ... See MoreSee Less

The new application, Skipper Science, aims to bridge the gap between fishermen and scientists. Fishermen can log and report observations on the water to assist researchers with their database. Click here to learn more about the Skipper Science Partnership skipperscience.org/ ... See MoreSee Less

Our fleet is going hard, all over Alaska! ... See MoreSee Less

👋 Raise your hand if you've ever run a sleep deficit while fishing! Take a look at this important research that's underway about commercial fishing and sleep, and go deeper if you'd like to participate! ... See MoreSee Less

COVID-19 changed everything...including how Americans eat seafood. Learn more about the results of a recent study sponsored by ASMI. Spoiler alert: more Americans are buying and enjoying seafood than ever before! ... See MoreSee Less

It's important that consumers know where their salmon comes from, and that they learn to always Ask For Alaska.

thank you . love it

Commercial fishermen are no longer required to wear masks while working in outdoor areas, based on the CDC’s federal order on June 11.